The concept of internal colonialism has several sources. One is the body of work from Latin American economists known broadly as dependency theory, and more specifically the idea of the “development of underdevelopment” during the Cold War (Gutiérrez 2004: 284). Another is the 1955 Bandung Conference in Thailand, which brought together many of the newly or soon-to-be independent colonies of Europe to discuss self-determination (Arneil 2017: 6). A third traces the notion of specifically African American internal colonialism (Pinderhughes 2010: 71). The latter trajectory has been most consistently elaborated over the years, with Charles Pinderhughes’ recent geo-spatial account being the most contemporary, while many of the other uses of the framework prominent in the 1960s and 70s having fallen out of favor.

How can we think of Puerto Rico, its current residents, and its colonial history alongside the history of Puerto Ricans on the mainland? Are they also colonized, and if so, is their colonization the same as that of the archipelago? How are the fates, politics, and projects of the islanders and the diaspora intertwined, divergent? I look to the politics and practices of the Young Lords Party, the multi-racial revolutionary Puerto Rican group active in New York City in the late 60s and early 70s, to address these questions. Modeled on the Black Panther Party, they found success early on with victories against the city regarding hospitals and sanitation, but were eventually torn apart not only by state repression but their own internal disagreements, most notably involving the ill-fated opening of an office on the island. I argue that, as the group’s political commitments bring together the two groups, an analysis of their decision illustrates how we can fruitfully understand Puerto Ricans on the whole as a dispersed population illustrative of geo-spatial internal neocolonialism. The specificities of how race, class, ethnicity, and language become entangled within Puerto Rican identity, however, reveal the potential bifurcation of conditions of internal neocolonialism, especially alongside Pinderhughes’ account of African America. 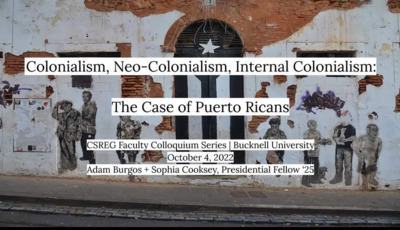