Rapid demographic and socio-economic changes have been taking place in China during the past forty years since the country began its reform and policy of opening-up in 1978. During the transition from a planned economy to a market economy, the economy in urban areas thrived and attracted migration from the rural labor force from across the country-side. Since the early 1990s, hundreds of millions of workers originally located in the countryside migrated to work in urban areas as temporary workers (estimated 246 million in 2016; the biggest internal migration flow ever). However, these migrant workers do not enjoy the same social benefits as their urban counterparts, such as health insurance and access to public services like enrolling in public schools, due to the restriction of household registration ─ the hukou system. Also, son preference and gender bias have been regarded as the two notoriously institutionalized forms of social disadvantage and discrimination in China. Young girls in China’s migrant households are more at risk for poor nutritional status than boys and women.

Many studies have analyzed the consequences of the Great Migration in China on the income and labor market outcomes of migrants, individuals left behind in rural areas, and those living in urban areas. However, substantial evidence is missing on how economic inequality in terms of consumption is affected by migration, particularly on migrant children’s health. Understanding these social disadvantages is crucial to measuring changes in standards of living and devising policy prescriptions to improve well-being. Hence, my presentation will explore the following two research questions:

a). What is the impact of the Great Migration in China on earnings and consumption patterns, especially economic inequality? b). Does social advantage among urban migrant households affect children’s nutritional status and health?

I aim to present my research with new evidence from China on how social disadvantage among urban migrant households affects children’s nutritional status. China constitutes an important case study not only because it is the world’s most populous country, but also because it has had to manage an enormous flow of rural to urban migration with the institutionalized system of exclusion (hukou) that may have unintended consequences for children’s well-being. I anticipate that my findings will offer powerful lessons and important public policy implications for other developing countries that are experiencing rapid rural-to-urban migration and urbanization.

This paper is coauthored with Yana Rodgers (Rutgers University). 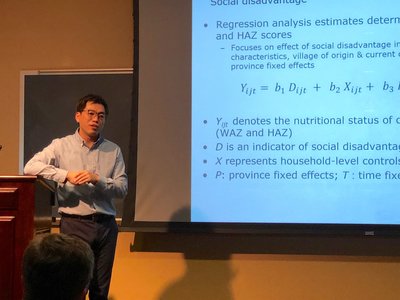