Associated with the American Mutoscope and Biograph Company, founded on December 27th of 1895 by W.K.L. Dickson, a former associate of Thomas Edison. The other founders of the company included Herman Casler, Harry N. Marvin, and Eliza Koopman (Fernett, American Film Studios, 8 ).

The mutoscope is a cylindrical container ranging in size from a large, standing viewing station down to a smaller, more transportable unit. These machines hold hundreds of small cards with images printed on them attached to a circular core. This core is attached to an external crank which is turned by the viewer. The booklet turns, and the cards are held tensely bent into viewing position by a small metal piece. As the cards flip by, the rapid frame rate produces the illusion of a moving image (Rossell,Living Pictures, 96).

It was the manufactured by the company, though its actual invention is accredited to and patented by Herman Casler (Rossell, Living Pictures, 96).

The mutoscope was invented in New York City, where the American Mutoscope and Biograph Company was located (Fernett, American Film Studios, 8).

Cleverly circumventing the patent that Edison had in place on his already-popular kinetoscope, Casler and the rest of the company sought to create a viable alternative. The mutoscope entered the scene as a rival to Edison’s creation, soon outstripping it in popularity in the peep-show entertainment business. The short, hand cranked flip books were sold at a penny a showing, their cheapness and simplicity contributing to their success (Fernett, American Film Studios, 8-9).

The major inspiration of the mutoscope was certainly the flipbook, a much shorter, more primitive form of animation which was hand-drawn rather than caught on film. The mutoscope’s other predecessor (and later its competitor) was Edison’s kinetoscope (Fernett, American Film Studios, 8-9).

The Kinetoscope, Edison’s competitor in the private peep show and entertainment business, as well as the Pathe cameras, another camera of the time period. (Rossell, Living Pictures, 88).

The major successor of the mutoscope is its counterpart, the Biograph. As the years passed by, projection became the much preferred method of entertainment over the flip-book style of the mutoscope. The Biograph eventually developed into a camera and projector, used to make films rather than the flip books of its origin. (Fernett, American Film Studios, 8-10). 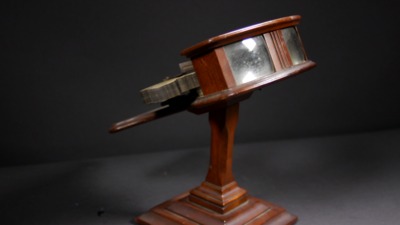