"According to Charles Musser, Huygens had two key innovations for his magic lantern: 1. Images painted on glass instead of etchings on mirrors. 2. An artificial light source was used instead of the reflection of sunlight. (20) Glass slides (often more than one) with hand drawn images are the standard aesthetic for these slides. They are then usually mounted in rectangular wooden frames approx. 4 x 7 inches with a 3 inch circular opening for the image. (Musser 30) The various mechanisms attached to the images are described in the Object Narrative section."

Athanasius Kircher’s "catoptric lamp" of the 1640s used mirrors to reflect sunlight images on darkened walls (Musser 17). The most important innovation of Kircher, as Musser further notes, was not the reflection of sunlight but instead the "demystification" of the apparatus. In other words, Kircher wanted his spectators to "understand that the show was a catoptric art (involving reflection and optics), not a magical one" (17). Indeed, the discourse of belief and practice of "magic" in the centuries prior to screen practices could also possibly be considered predecessors to the magic lantern.

1830s: Henry Langdon Childe and others developed "dissolving views," which, "by the 1840s" were considered "the ultimate manifestation of the lanternist’s art" (Heard 19).

Further inventions that conveyed moving images include Coleman Sellers 1861 kinematoscope, "an improvement on the stereoscope that showed movement through a succession of images" (Musser 43), O.B. Brown’s 1870 phasmatrope, a “wheel-like attachment” that "held sixteen photographic slides mounted radially along its outer edge" (Musser 45), as well as inventions like Edward Muybridge’s zoopraxinoscope (1878) and Thomas Edison’s kinetoscope (1888) that take us right to the inventions of cinema. Last but not least, it would seem that these animated magic lantern slides also predate the massively popular form of–animation. 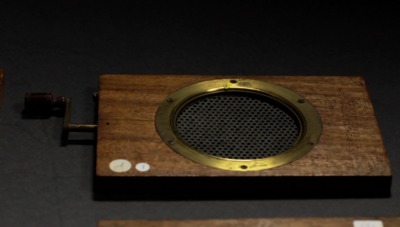