The object consists of a disc with 20 or so images of an object/person around the edges, each slightly in a different position and space. Extending from the edges of the disc is a shutter: there are slots that one looks through with a solid part in between that blocks some of our view when in rotation to give the illusion of movement. A mirror is also used with the device. The user spins the wheel, while looking at the mirror and seeing the reflection of the phenakistoscope. The shutter blocks some of the image so that what we see appears to be moving, or animated. (Leskosky, 178).

Referred to as a “‘philosophical toy’”, (Leskosky, pg. 176) the phenakistoscope was the first pre-cinematic device to create the illusion of moving pictures, or ‘full animation’ (Leskosky, 177).

Thaumatrope invented by Dr. William Henry Fitton (London). Most likely the original device the phenakistoscope was based on – utilized Peter Mark Roget’s observations on “the persistence of vision” (Movie Jargon, Terry Ramsaye, 358).

Anorthoscope (1828) – invented by Joseph Plateau (Belgium). It consisted of a wheel with a distorted picture and a four-slot shutter. Both pieces spun in opposite directions, making the image appear to be normal. (Leskosky, 179)

Faraday Wheel (1831) – invented by Michael Faraday. Also consisted of two discs, but they could spin in same or different directions and at different speeds. It offered various illusions. (Leskosky, 179).

- Daedaleum (Zoetrope) – Simpler version of the phenakistoscope, like a flip book to create illusion of movement because of our persistence of vision. (“Review”, Herb Karl, 1302) Did not require a mirror or a second disk.

- Kinomoscope (meaning “to see the motion”) – combination of the phenakistoscope and the stereoscope by Adam Dunin Jundzill in 1856 (Leskosky, 181).

- Phasmatrope – invented by Henry Heyl in 1870. Used “ratchet and pawl mechanism” instead of shutter disk and projected image through light (Leskosky, 183).

- Zoopraxiscope – invented by Eadweard Muybridge. Based on the phenakistoscope, it was a projection machine that had rotating discs with hand-drawn pictures, along with a lantern and shutter (Living Pictures, Deac Rossell, 36).

The spinning wheel is a current tool that is somewhat related to the phenakistoscope. Instead of rotation, it produces the illusion of movement using different colors and intersecting lines. 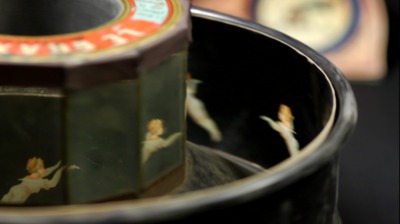