Wheatstone’s stereoscope placed two mirrors on either side that were mounted at a right angle in order to view the two dissimilar drawings presented (Hankins 148). There are two identical monocular tubes that allow each eye to view the images (Hankins 148). Each eye views the image it was intended to see. The two eyes see slightly different images through this binocular vision (Hankins 148). The combination of the two images creates this illusion of depth and solidarity through their superimposition (Hankins 154). In order to view these images, the eyes were covered from all external light (Clay 152). The stereoscope was first seen as a philosophical toy along with other inventions such as the zoetrope, providing entertainment as well as scientific insight (Hankins 148). The stereoscope above is more similar to the “Holmes Stereoscope”, which transformed Wheatstone’s stereoscope into a handheld version that could be put on a stand (Hawkins 155). He replaced the retina of the eye with a sensitive plate; therefore, the lenses acted as the eyes (Silverman 738). In the video, an embellishment adorns the bottom of the stand that holds up the binocular lens and the images. The lenses are in a wooden frame that has an attached stand that holds the slides of images. There also is a knob on the side of the device that can adjust the lens on the two monocular tubes (Bokander 485).

Da Vinci emphasized that parts of distant object were hidden from view by a closer object from one eye but are able to be seen by opening the other eye (Clay 150). This is an early example of showing the differences of what is being seen from each eye. Kepler and Descartes explained that “the muscular sensations arising from the convergence of the eyes in binocular vision might play a role in measuring the distances of objects,” showing the power of the eyes to work together to create depth (Hawkins 148). Wheatstone, in June 1938 in England, described to the Royal Society how to produce the illusion of this stereoscopic relief by the artificial combination of two dissimilar plane representations of an object in his published work, “Contributions to the Physiological Vision” (Clay 151).

The stereoscope was able “to indicate its property of representing solid images” (Hankins 148). It allowed viewers to study vision and the way in which eyes can perceive a sense of depth through two dissimilar points or images (Hankins 148). The stereoscope “came to the public attention that encompassed a new vision, one that included empire and world trade” (Gitelman 24).

Samuel van Hoogstraten’s perspective box (1655-1660) utilized perspective to give the audience the sense of “peeping in” on a room or other location. This concept of “perspective” is exemplified in the earliest forms of the stereoscope onward.

The “Pseudoscope” produced an inverse stereoscopic result by interchanging pictures presented to the right and left eyes (Clay 160).

1843: Horn and Thornwaite introduced the reflecting stereoscope that was a “bijou” stereoscope with slides (Clay 159).

1849: Sir David Brewster invented the binocular camera that maintained a lensatic seperation of 2 ½ inches (Hankins 157). The binocular camera acted as a pair of eyes as the lenses were mounted from an ordinary convex lens split in half (Clay 158). These lenses superimposed the images, while magnifying them so that they could be seen (Clay 158).

1862: Swan’s “Crystal Cube” was a rectangular black of glass in which two pictures were mounted on two of the outer faces of the block dealing with critical angles (Clay 159). His other invention, “Clairvoyant” stereoscope, used corrugated glass between the two lenses (Clay 159).

1867: James Clerk Maxwell introduced the “New Stereoscope” which a transparency was placed about two feet away at the end of a board (Clay 160).

The View-Master, a lovable childhood toy for many, is a recognizable successor of the stereoscope that allowed children to view images three-dimensionally in the form of a story. Hasbro has recently launched the Hasbro My3D, which adds depth to the screen of an iPhone or iPod touch (Ortutay 1). There are two holes at the bottom of the device that allow users to continue to use the screen in order to play the various games downloaded from the apps on iTunes, while looking through the lens. (Ortutay 1). Perhaps most famously, the stereoscope has paved the way for modern 3D films of today, which use 3D glasses of two different lens colors that combine to allow the viewer to perceive the images on screen as three-dimensional. The clip below describes the modern process of 3D effects, which have an extremely uncanny similarity to the function of Wheatstone’s early model. 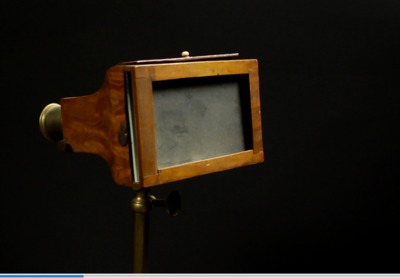