The thaumatrope consists of a circle of cardstock, 2.5 inches in diameter with 2 strings attached, one each at opposite points of the diameter. There were 2 images painted on the cardstock, one on each side, with their positions inverted. The outline of the image was usually printed and the color hand-painted in (Barnes 7).

Dr. John Ayrton Paris, who commercialized its use, is generally credited with its invention. However, the contributions of astronomer Sir John Herschel and Dr. William Henry Fitton are also credited to varying extent.

The thaumatrope was initially used to illustrate the phenomenon of retinal persistence, or persistence of vision: the idea that continuous motion was perceived because images remained on the retina for a period after the image was seen (Clee 71).

While holding one string in the thumb and finger of each hand the strings were spun quickly, turning the circle and creating the illusion that the images on either side were combined (Mannoni 206). Other accounts describe winding the strings and then pulling them tight to induce the spin (Clee 71). The images chosen were separate but related so that they could be combined in one coherent image. For example, the most common image pair was a bird and birdcage so that the bird appeared to be in the birdcage (Barnes 7).

The idea of retinal persistence was first pondered by Aristotle who found that the image of the sun remained in his vision after he stopped looking at it. Others such as Leonardo da Vinci and Isaac Newton were also curious about this phenomenon (Mannoni 202). There were several experiments and apparatuses that explored persistence of vision before the thaumatrope’s invention.

In 1740, German Johannes Segner reported that a glowing coal rotated in the dark was seen as a continuous circle. He experimented to discover how long the circular image was retained (Mannoni 203).

In 1765, Frenchman Count Patrice D’Arcy mechanized this glowing coal experiment with a striker that more accurately counted the rotations to discover the length of retention (Mannoni 204).

In 1820, John Murray of the London Quarterly Journal of Science noted that a rotating wheel seen through fence slats appeared to be many still images (Mannoni 205).

In 1824, English mathematician Peter Mark Roget explained these phenomena as being due to impressions of light on the retina, or retinal persistence. This led to the creation of optical toys that experimented with retinal persistence, the thaumatrope being the first (Manonni 205).

The Pedemascope used 2 different, complete, pictures painted on a card. The card was attached to a stick, which could be spun between the fingers/hands, creating a back-and-forth movement that created a better illusion (Barnes 17).

A device similar to the pedemascope also had a card on a vertical stick, but was attached to a paddle wheel that was spun by blowing on it (Barnes 21).

Other variations of the thaumatrope used using larger images spun by belt-driven wheels for a smoother melding of the two images (Barnes 18).

Due to their reliance on the phenonmenon of persistence of vision, it can be argued that any optical device up to and including cinema of today is derived from the thaumatrope. The following are the most immediate successors. Plateau’s Anorthoscope, 1828, was a disc device that further experimented with persistence of vision by rotating toothed wheels. He analyzed the stationary appearance of the teeth as well as the illusion of extra, static images when two curves were rotating (Mannoni 209). After experimenting with his anorthoscope, Plateau went on to create the Phenakistiscope, used to animate a series of colored drawings which were viewed in a mirror (Mannoni 215). Faraday’s Wheel, 1830, created in isolation of Plateau, was essentially the same as the anorthoscope and consisted of multiple toothed wheels which were rotated to experiment with the ‘stroboscopic’ illusion that was a result of the persistence of vision (Mannoni 213). 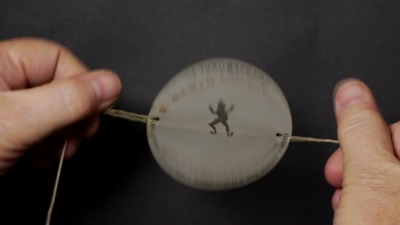