A biunal magic lantern is a wooden box with two lenses, one on top of the other. The lenses have shutters and slots to insert glass slides. The light source is placed inside the box and the images are projected through either of the two lenses. It works in the same way as traditional magic lanterns, but allows for dissolving images and special effects.

When dissolving lanterns and the use of oil lamps for effects were developed, lanternists needed pairs of lanterns side by side. The use of limelight, however, made it possible to design multiple lanterns in a single unit. (Servants of Light, 22).

E. G. Wood is given credit for inventing the first biunial magic lantern in London. A A Wood (the son of E. G. Wood) detailed his father’s invention in a manual published in 1891. He gives no date for the actual invention, but the lantern went on sale in 1857. Samuel Highley designed another early biunial lantern. His lantern had a dissolving tap to show dissolving views by limelight. W. C. Hughes developed a lantern that could be used as a biunial or separated and used as two lanterns side by side (Servants of Light, 22). 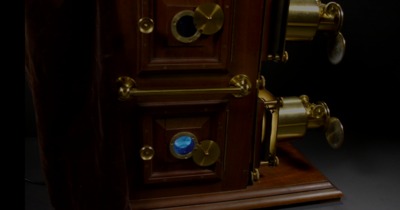