The size of the Zoetrope was roughly between a foot or two of cubic space, although the exact dimensions vary from model to model. The materials used to create the Zoetrope were fairly basic; the wooden platform served as the stabilizer, the cylinder was mounted on a wooden or metal pole that elevated the viewing platform and the cylinder itself, we can deduce, was made of a flexible paper-like material that allowed slots to be cut into it. The band with the painted or sketched images would be made of a similar if not identical material as it has to change form to fit inside its corresponding cylinder.

From the nationalities of Stampfer and Hoerner this device seems to have originated within the borders of Austria and Britain. Later patents were seen to appear further spread throughout Europe and even as far spread as America as well.

Images painted along a strip of flexible cardboard-like material that fit inside a hollow cylindrical column were viewed through long, vertical, rectangular cut-outs positioned around the circumference of the cylinder. The viewing of the images was facilitated by the spinning of the cylinder on its platform and axis (a pole). The viewing of images in direct succession created one of the first moving pictures.

The Phenakistoscope (the images in this device were on a circular disk and were viewed in much the same way as one would view the Zoetrope images. The difference between the two was that with the Zoetrope one views the images from a relatively convenient standing or seated position, but with the Phenakistoscope, one must find a mirror or reflective surface and position themselves and the device so as to be able to see the images’ reflections)

The closest modern objects related to the Zoetrope can be found in as simple a place as a child’s toy box. The number of toys and trinkets that are designed the same way as these various scopes with the viewing of images in mind reaches ridiculous numbers. Also related, though ever so much more distantly is the modern day merry-go-round. Images (three dimensional objects, but still no different than images to an observer) rotate around on an axis in front of the viewer and provide a form of moving image. Unlike the Zoetrope, these images are not sketched in closely choreographed succession to one another but are each representative of a separate image in itself. 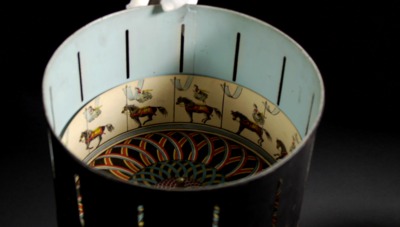